Robert Hammersley, conducting the Ardingly Choral Society and the Mid Sussex Sinfonia, has again resoundingly revived a nineteenth-century sacred choral work by a major composer of better known secular music. Following Dvorak's Stabat Mater this spring, for this well attended Remembrance Concert he chose Puccini's teenage graduation piece, his Messa di Gloria (1880). In a deeply felt rendition, with chorus and orchestra on fire and three young soloists at one with the score, every syllable crystal clear and sympathetically conveyed, hindsight revealed why the playboy musician would become Verdi's true heir. Just the duet in the closing Agnus Dei by tenor Lawrence Olsworth-Peter and bass Michael Christie was worth coming for. Closing, Hammersley, emulating the mature Puccini's showmanship, extended the score with a rousing reprise of the 'Gloria' section. Success! We went home humming the exultant tune and Royal British Legion funds had been deservedly swelled.

Before the interval the audience joined in lustily with Parry's 'Jerusalem', having been inspired to celebrate the joie de vivre of youth by Verdi's drinking song, the 'Brindisi' from La Traviata, effortlessly made to fizz and sparkle by soprano Olivia Bell and Lawrence Olsworthy-Peter. They, like Christie, will enjoy distinguished careers.

Unlike, sadly, the lost generations commemorated in music and poetry. Such poignancy was made in Hammersley's 'Remembrance' - bookended by the Last Post and Reveille, with the audience standing. The sweet sixty voices of the Ardingly College Prep School Choir, directed by Stephen Smith and accompanied by Max Kenworthy, joined their seniors and then charmed us with 'The Lord is My Shepherd', 'Simple Gifts' and Christina Rossetti's poem 'Remember Me'.

Sassoon's 'Everyone Sang', skilfully woven into the Allegretto of Beethoven's Seventh Symphony, and Franck's gentle, other-worldly Panis Angelicus, centred the first half of an evening when Remembrance made us pause, give thanks and recognise the huge potential of youth, especially when, as here, generations and genres are creatively united. 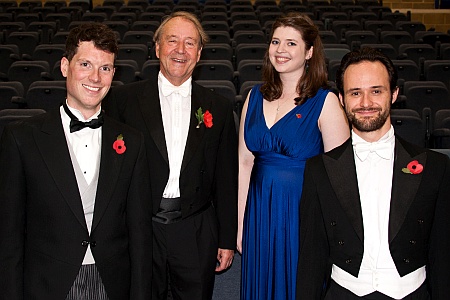