The Creation by Haydn

The prolific, devout Joseph Haydn saved his greatest music for his old age, sensationally matching Handel's celebrated oratorios in The Creation (1799) - yet in under two hours. It was conductor Robert Hammersley's musical genius, in a packed Ardingly College Chapel - an ideal spacious venue for this choral and orchestral masterpiece - to draw a landmark performance from his professional and amateur forces, in aid of Marie Curie.*

Haydn wanted English speaking audiences to hear the familiar words of the King James Bible. Every word and nuance, with subtle characterisation, was sung crystal clearly, from a hush to bird song to ominous warnings, by Eloise Irving (soprano), Mark Stone (baritone) and Adrian Thompson (tenor). Each told the great story with fascinating freshness. Eloise's silky vibrato painted Eve's delight at earthly paradise with the infectious joy of youth, Mark majestically set the chaotic scene of the earth 'without form and void' and Adrian, with just a raised eyebrow, left the attentive audience sure of the significance of Haydn's only joyless moment - Adam and Eve's happiness 'misled by false conceit'. Their joyful trios, some shared with the chorus, blended well with the Mid Sussex Sinfonia, led by Martin Palmer, on top form.

Haydn's chorus here, with one notable exception - 'The heavens are telling the glory of God' - is slightly less prominent than in Handel's oratorios, but the Ardingly Choral Society sang with warmth, cohesion, precision and polish. Similarly, Haydn had scored very little for a second female voice but Jane Haughton (mezzo soprano), in the final quartet with chorus, helped to ensure a memorable Amen to Hammersley's wonderfully holistic rendering of Haydn's awe at God's Creation.

*Thanks to everyone’s generosity, the choir raised the sum of £408 for Marie Curie. 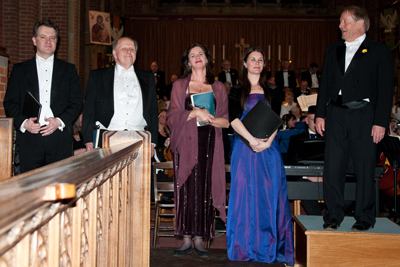