A packed Chapel listened spellbound as Ardingly Choral Society surpassed its own high standards as Robert Hammersley conducted it and the equally polished Mid Sussex Sinfonia in the Society's centenary performance of a great nineteenth century Requiem. Verdi, modestly describing his tribute to the inspirational Risorgimento author Manzoni, said he'd only written 'note after note, to the greater glory of God'. But how memorably, drawing on the controlled emotional power and variety of his operatic masterpieces to produce a ‘Dies irae’ that eclipses his storm in ‘Otello’ to a ‘Sanctus’ and ‘Agnus Dei’ as tender as the final act of La Traviata, and trumpets in a ‘Tuba mirum’ as resplendent as in ‘Aidi’, premiered two years earlier.

The soloists, internationally accomplished in sacred works and Italian opera, proved perfect partners for Hammersley in conveying the fire, awe, pathos and structural balance in Verdi's score, matched since only by Britten's War Requiem. They filled the vast auditorium with controlled power, deft phrasing and expressive empathy with the text. Neil Jenkins was celebrating 50 years as a tenor. Sally Harrison (soprano) had returned to perform the piece again under her former teacher, dedicating it to her parents. Like them, Robert Davies (bass), acclaimed in Britten and Mozart Requiems, was equally at home in Verdi's sound world. Jane Haughton (mezzo), well respected in Sussex for her inspirational teaching, completed their master class in legato and the interweaving of emotions and devotional thought.

Stephen Brown’s reduced orchestration (2014), from soft, shimmering strings to threatening thunder, enabled the Sinfonia to complement the singers’ suggestion of thoughts too deep for words. The final roof-raising applause said it all: ‘A fitting ton-up for the ACS!’ 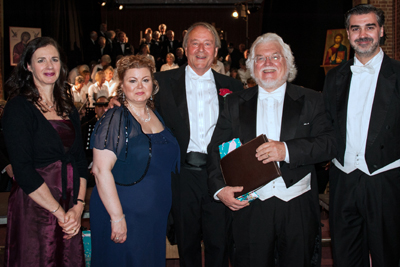