This was a concert to remember, spiritually, emotionally, artistically and, in response to the Royal British Legion’s spokesperson Johnny Dunford’s interval appeal, financially, as the audience gave generously to a great cause. Conductor Robert Hammersley’s imaginatively inclusive programme had the appropriate blend of respect, dignity and optimism in this, the Ardingly Choral Society's and Dame Vera Lynn’s centenary year.

Hammersley’s ’Remembrance’ set the right note, as the audience stood and Neal Bland's reverential rendition of ’The Last Post’ was followed by a delightful trio of songs from the combined choirs of Ardingly and Copthorne Prep Schools. Next Jane Haughton (alto), warmly capturing the Forces’ Sweetheart’s wartime optimism, led the whole house in Hammersley's arrangements of ’The White Cliffs of Dover’ and ’We’ll Meet Again’.

And so, suitably, to well known excerpts from a mass for peace, Karl Jenkins’ ’The Armed Man’, with its military march rhythm in the background as a reminder of our capacity for terrible destruction. Singing lustily together Parry’s ’Jerusalem’ (1916) ended an emotionally charged first half.

The seamless unity of the Choral Society and Sinfonia (led by Martin Palmer), each excelling themselves, ensured that everyone present will remember that Gounod was not simply the composer of the great opera ’Faust’ but also of masses as poignant as the one he dedicated to music’s own St Cecilia. Throughout, it provides alternate ’a capella’ choral and silken string passages - effectively delivered here. It demands, too, sympathetic and unwavering solo and trio singing. The silver tones and pinpoint diction of Olivia Bell (soprano), Lawrence Olsworth-Peter (tenor) and Robert Davies (baritone) would have greatly pleased Gounod. 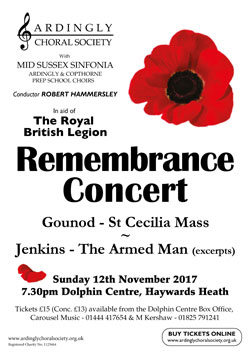