The annual Mid-Sussex Remembrance Concert in aid of the Royal British Legion took place in the Dolphin Centre on Sunday with a plethora of outstanding performers. Ardingly Choral Society with the Mid-Sussex Sinfonia were joined by Tavistock & Summerhill and Ardingly Prep School Choirs and an elite trio of Ardingly students provided conga players. The soloists were local professionals and provided truly inspired singing. Robert Hammersley directed proceedings with great flair.

The first piece was Hammersley’s Remembrance. In this piece, the fifty or so children of the school choirs joined the fine voices of the Ardingly Choral Society to sing words from Laurence Binyon’s moving poem. It was apt to hear this range of generations singing, "We will remember them". By odd coincidence, during this, some loud fireworks were clearly heard from outside which seemed to provide echoes of battle.

A change of mood ensued, where the children gave a most polished rendition of songs from Bugsy Malone, full of energy and clear diction. A happy atmosphere set, we moved on to William Walton's majestic Crown Imperial, which was briskly and determinedly delivered by the excellent musicians of the Mid-Sussex Sinfonia. Then followed Parry's Jerusalem with the audience joining the choir to sing this rousing hymn.

Before the interval, we were treated to excerpts of 'Fragile Earth'. This work was written by Robert Hammersley in 2011. The Schola Cantorum of Oxford gave the premiere at Dorchester Abbey last October. The work takes rich inspiration from the wonders of the earth and the need to conserve the environment. It is also heavily influenced by the ancient scriptures of all the main faiths which seems appropriate when considering our earth. The music began with steady, pulsing drum beats from the congas, which to me evoked a wild remote forest. The beats soon gathered pace and were joined by the orchestra playing whirling, overlapping rhythms as different aspects of creation took their turn. The performance featured two amazing soloists, Eloise Irving (soprano) and James Platt (Bass). James sang with captivating authority during God's Covenant. This combined with the Eloise's achingly beautiful voice which seemed to begin from nowhere and rise effortlessly, and then fade unnoticed as the bass took his turn again. The strings and harp continued their simple and beautiful theme. Having heard this work live, so clear was the musical imagery, 'Fragile Earth' seemed such an obvious title.

The second half continued in the same high standard with Mozart's Coronation Mass where Eloise Irving and James Platt were joined by Lawrence Olsworth-Peter (Tenor) and Jane Haughton (Alto).

All in all, an extremely enjoyable and memorable concert. 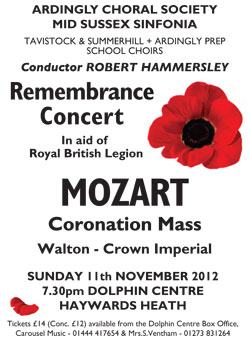