When a big Mid Sussex audience is coaxed by the expressive, warm mezzo voice of Jane Haughton and the ebullient conducting of Robert Hammersley to join in the choruses of 'Roses of Picardy' (1916), 'Keep the Home Fires Burning' (1914) and 'Jerusalem', and then encouraged by Cuckfield Royal British Legion Chairman Anthony Burbidge to donate to his 93 year old charity, it finds its big sweet voice and digs deep at the interval. So it proved at the Dolphin Centre in the Remembrance Concert's eighteenth year - a century after the lights went out all over Europe.

Listeners had been moved by Hammersley's own 'Remembrance', poignantly rendered by the Ardingly Choral Society and Mid Sussex Sinfonia. Next they had been charmed by the seven soloists and 43 other mixed voices of Ardingly College Prep School, conducted by Stephen Smith and accompanied by Max Kenworthy in lively, well drilled arrangements of 'Deep River', 'Remember Me' and 'Gospel Train', before the five dozen adult voices and 40-strong Sinfonia pledged a powerful patriotic vow in Holst's 'Jupiter' (1916).

The second half of intriguing, engaging musical contrasts proved that those wartime European lights shine again. As delicate as poppy petals, the Choral Society's voices floated above the Sinfonia's dulcet strings in the teenage Fauré's well loved, gentle 'Cantique de Jean Racine', which foreshadowed his 'Requiem'. The other sacred work - with mature multi-faith readings from four Prep School choristers and a soft, simple song of praise intoned sincerely by Jane Haughton in Remembrance red and black - was 2010 vintage. Karl Jenkins' exuberant 'Gloria' has his trade-mark earthy harmonies, insistent drummed rhythms, declamatory choral style and eclectic texts. The work of a cross-over composer following Bernstein, it blends Stravinsky's 'Rite of Spring', Ravel's 'Bolero' and 'West Side Story'. Hammersley's forces rose to this modern classic's challenge with appropriate gusto and discipline. The audience, after such a forward looking night of Remembrance, left stunned, deeply satisfied by an imaginative and stimulating programme delivered with crisp diction and drive by young and old.

Review and photo by Melvyn Walmsley 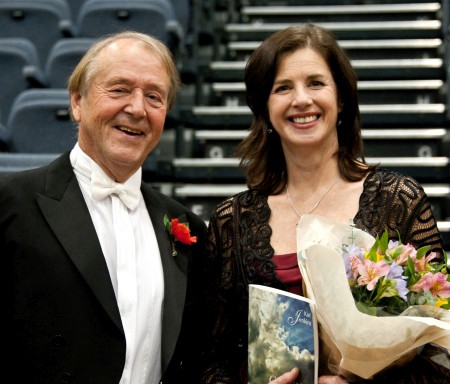